This project is owned by Drive By Websites & Drive By Design or the respective client, and is posted with permission. 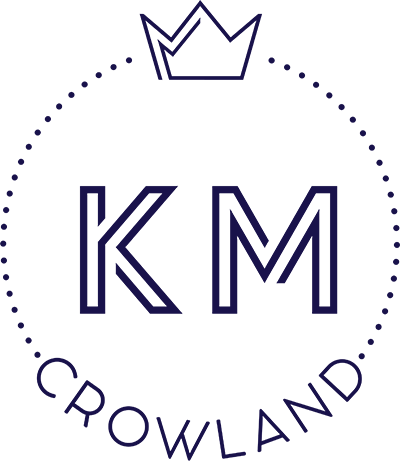 For this project project, Ashwood Homes decided they wanted the logo design for their housing development site, Kingsgate Mews to be clean and modern, but above all else they wanted to communicate the theme of connectivity. The site itself is located in Crowland, a small town which is half way between Spalding and Peterborough, so their target market were those working in either location - or a little further afield - but didn't mind a little bit of a commute.

We settled on a design which bought into the 'Kingsgate' name with the crown imagery, and used both the dots and broken lines to communicate the idea of joining dots and bridging gaps, and to bring a strong sense of movement to a still image. The long-form logo above does that perfectly, and the team at Ashwood Homes were really happy with the result. However having previously designed brochures for them, for this same purpose, I knew that although they were really happy with it, the orientation of the logo would create real limitations for them further down the line.

To resolve the issue I designed a short-form sister logo. A sort of monogram to retain the core appearance of the main logo, but for use where only a square space is available, and where the logo needed to be there for branding purposes, but not to inform customers of the site's name. For instance, the long form logo was used on the front of the brochure and the short form logo was used on the inner pages of the brochure.

As per Ashwood Homes' brochure template, there's another brand element needed for each site, something more linear/pattern based both to go on the inner cover and on the branding bar at the bottom of each housetype. Upon discussing it with the team at Ashwood Homes, we settled upon two potential routes for the graphic, either a labyrinth-like pattern using broken double lines like the font and crown in the logo designs, or something using the dots from the logo. I did a little bit of research into dotted patterns and found that we could spell out 'Your home, our vision' (Ashwood Homes' tag line) in brail using filled in vs outlined dots to create a seemingly random pattern with a nicely relevant hidden meaning. They were very pleased with the result and I've since used similar hidden-meaning graphics (morse code, for instance) within their other development site brands in a similar fashion.