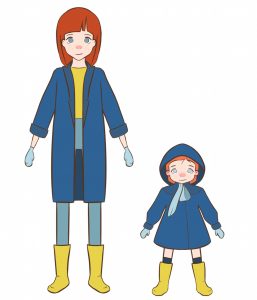 Throughout 2018 I’ve been working on an animated short; Ammil, the first in a collection of short films I'm creating using uncommon animation styles and/or techniques. In this case, I'm using mixture of cutout, stop-motion and digital animation. It’s a technique I’ve wanted to try out for a couple of years now; since watching John Lewis’ ‘The Bear and the Hare’. The Christmas advert employs a similar technique, but had a huge (not to mention uber-talented) team and budget to work with, whereas I'm all by myself with a set that's largely made from found materials.

Ammil is a totally solo project from concept to completion and I’m excited to show you my character designs for Elle. She’s our number one protagonist; a sweet little girl who heads out to try her new ice skates, an event that cataly

ses her yearly tradition. As you can see, she starts off as a very young child and we follow her through to her teenage

years. There are a couple of other characters, some human, some not, but none of them are antagonists. For this story I'm playing with the idea that the harsh winter environment is the villain and therefore a character in itself, albeit an abstract one.

I decided that as it's my first fully-fledged animation since I was a student, I wanted to bring together a few of my favourite animation styles, so I limited the colours in the character designs to a Hanna-Barbera-esque pallet and infused it into my own 90s-anime-influenced style. Once I finish roughing out the animation itself, I've got to apply the full colour designs, then print and cut all of the frames out. After that they get placed in the physical 3D set and re-animated. I can see why it's an uncommon technique; there's a lot of cost, time and repetition involved, but I'm crossing my fingers that it'll pay off when I start submitting to film festivals.

You can use the hashtags #Ammil, #AmmilShortFilm and #AmmilAnimatedShort to keep up with progress on this project, or follow me on Twitter and Instagram to get updates on everything I’m up to. And of course, don’t forget to Subscribe right here, to have my blogs drop directly into your inbox.